Provinces With the Highest Minimum Wage Rate: A Savior During Recession 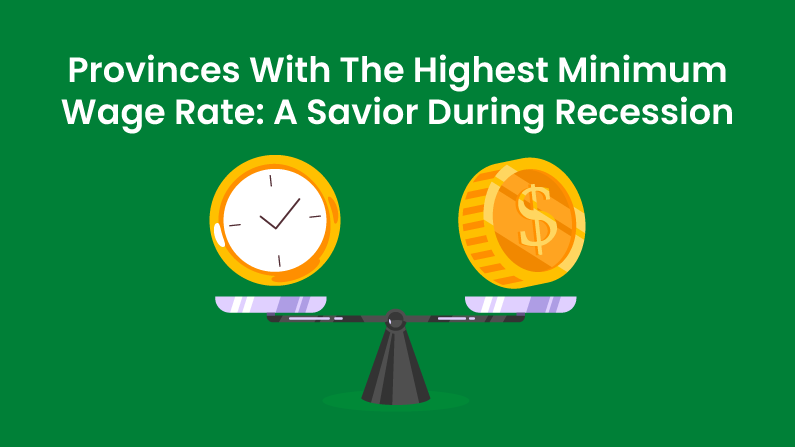 There’s a NEWS in the air that says the recession is coming to Canada. According to Doug Porter, chief economist at BMO Capital Markets, the current recession indicators are too high to be taken lightly. He said,

“There’s a 50/50 chance of us falling into recession by next year. The fact is that we are likely looking at a cumulative rate hike of 300 basis points (or a bit more) in North America, and that is a very serious amount of tightening in a single year, which at the very least will cut growth close to zero.”

Another economist, David Doyle, forecasted a 70% chance of falling into recession. But contrary to that, Jean-Francois Perrault, senior vice-president and chief economist at Scotiabank, said it is unlikely for Canada to witness a recession.

The internet is filled with people actively looking for answers to whether there will be a recession in 2023? Or are we already in a recession? But we can only speculate based on current indicators. But if changes have been made on time, we may avoid the critical impacts of the recession.

The other things like the inflation rate have already started affecting our lives. For example, Canada has witnessed the highest inflation rate of all time at 7.7%. As a result, everyday cost of goods has gone up exponentially.

But if we look at it the other way, high prices mean consumers will be spending more. So, eventually, it will add up to the country’s GDP. Moreover, recession will also lead to a lower interest rate on loans, which makes taking loans easy. Or, if you have bad credit, then you can get a bad credit loan from Instant Funding during these times.

For the general public, inflation can be troublesome as higher prices mean a higher cost of living. So, Instant Funding has compiled a list of provinces offering the highest minimum wage rates. So, if you are planning a job change or looking for a job, these provinces will help you get a well-paying job.

Province with the highest Wage rate The current highest wage rate in Canada is offered by the largest territory – Nunavut, at $16 per hour. But this cost is justifiable, Nunavut is a snow land, and the cost of availing goods and services in a snow-covered land is equally difficult. Sp, people have to pay more for even basic products, such as $7 for 3 bananas.

Yukon is a territory that follows CPI (Consumer Price Index) to determine its minimum wage rate. In April of 2022, the minimum wage rate was increased from $13.85 last year to $15.70 this year.

Located on Canada’s Pacific coast, British Columbia has a minimum wage rate of $15.65. The rate was increased on 1 June, which marked a $0.45 increase from last year. The increase was due to the higher cost of living in British Columbia. According to a study conducted in 2021, in the previous wage rate, the average monthly income of one person was estimated at $1967, with a cost of living of $2,283. This leaves a $316 deficit each month. So, the new wage code will ensure you earn more than you spend.

North-West territories showed a huge jump in the minimum wage rate from $13.46 in 2021 to $15.20 in 2022. The main purpose the hike was implemented was because the NWT government wanted to attain a balance between fair wages and to help small businesses.

Alberta has $15 as the minimum wage rate, which was last increased in 2018 when the NDP was in power. At that time, Alberta was the province that provided the highest wage rate in Canada. Many parties, including the UCP (currently in power), opposed to this law by stating it would kill jobs. But since then, the minimum wage rate has stayed the same. However, with NDP gone and UCP in power, it is unlikely for people to see another hike as UCP was already against this policy.

With a population of 14.5 million people, it has quite a big chunk of people living there. In addition, Ontario has a minimum wage rate of $15, which is also majorly influenced by the CPI. The higher CPI, the higher the wage rate and vice versa.

In May 2022, Quebec province announced a $0.75 increase in the minimum wage rate, totaling the new wage at $14.25. Although not many people like this slight increase because it doesn’t match the increasing cost of living in the province and will not improve their financial situation much.

Neighboring PEI, Nova Scotia, offers a minimum wage rate of $13.35. However, the good news is that the province has announced to raise its minimum wage rate to $13.60 before the end of 2022 and will raise it to $15 by 2024. So, you can expect a good or rather a safe future here.

New Brunswick has the title of having the lowest wage rate in the maritime region and the third lowest in Canada, with an hourly rate of $12.75. But the province will raise its minimum wage rate to $13.75 in October 2022.

Manitoba offers a minimum wage rate of $11.95, which is the second-lowest in the country. It also uses the same principle as the western neighbor – using CPI as a base to increase the minimum wage rate.

It may be a beautiful place to live, but it’s not so pretty for a living. It has a minimum wage rate of $11.81. The annual wage rate of Saskatchewan is tied to the CPI. But it also has a low cost of living despite having the 6th largest population in Canada.

So, these states are ranked from the highest to the lowest minimum wage rate in Canada. So, based on this you can choose your next job. But this should not be your sole deciding factor. Your wage can also vary based on your profession.

No comments to show.